Google’s BERT update was slated to be one of the biggest algorithm updates in years. With an expected one in ten search queries to be affected by the update, the arrival of the algorithm change caused SEO teams to worry about potential impact to website rankings and traffic.

Like with every change to an algorithm, SEO agencies are immediately concerned with how to optimise their content for BERT and want to know what changes need to be made to their SEO strategies to optimise for this change.

The BERT algorithm change was introduced in 2019 and is used to help Google understand more complex queries. It stands for Bidirectional Encoder Representation from Transformers (it’s a bit of a mouthful…) and is used to process human language in a more nuanced way. It gives the search engine a better understanding of searches that contain everyday language, and the context of that language, to surface content that is written for people - not search engines.

With 15% of searches being new, Google is responding to an ever increasing number of searches using more words, in a more conversational tone. This algorithm update will enable Google to respond to the new ways people are searching and return more relevant results to its users.

So, how does Google return more accurate results?

Traditionally, computers and software have a hard time understanding language. They could process the text, but understanding meaning was difficult - particularly when the query used more conversational or natural language or had a very contextual meaning.

BERT is Google’s attempt to resolve this and return better search results for the kinds of queries it traditionally had trouble with. With the rise of voice search, this seems like an even more relevant goal. 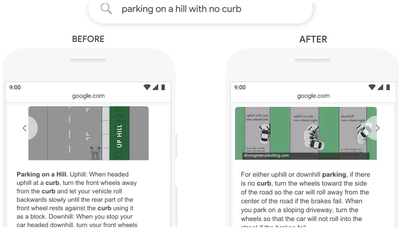 Google can correctly attribute “no” to the rest of the sentence, placing more emphasis on this word when understanding the query. After the update, the word “no” was correctly considered which changed the above featured snippet to something that is relevant to what the user.

After the BERT update was applied, the page that appeared at the top of results was much more relevant to the searcher’s intent and much more nuanced. It understands that “for someone” was a vital part of the query.

Google is therefore much better at natural language processing, and searchers are encouraged to use natural language when performing a search rather than trying to use specific keywords. This frees them up to use longer-tail queries so they can be more specific when looking for information.

So how do SEO teams optimise content for SEO?

In short, you can’t. Not really.

There is “nothing to optimise for” as Google’s Danny Sullivan has informed digital marketers on Twitter.

The BERT changes are not about “adding X” or “not doing Y” to your content. It reinforces what Google has been saying for years - write your contentfor users, not for search engines.

But that doesn’t mean that BERT isn’t important, or there aren’t takeaways that those investing in SEO need to take note of. There are changes that can be made from a strategy level in your campaigns to work with the changes.

While optimising for BERT can’t be done, content marketers and SEO teams can use this new feature to be a bit freer with the way they create content. Digging into nuanced elements of a topic, and crafting content that addresses long tail keywords, is now more rewarding as it can be created in a user-friendly way that doesn’t sacrifice quality for keyword stuffing.

The increased nuance in understanding of search queries means that previously underperforming content can rise to the top of search results.

The changes brought in by BERT affect queries that are closer to the top of the funnel – awareness and consideration keywords that are more about searching for information rather than those looking to convert. Creating top of funnel “pull” content to reach out to searchers and help them in their consumer journey will now be more effective.

The BERT changes will shake up featured snippets. These highly covered features will now return more relevant results, just like their ‘blue link’ counterparts. Diving in on position zero results as part of your SEO strategy can yield better results.

BERT is a Logical Step

With publishers being pushed to improve their content quality, the next logical step for Google is to be able to better surface that content - rewarding underperforming content that efficiently addresses a searcher’s query. Expect to see this trend continue as users continue to interact with search engines with increasingly complex queries.

Every couple of months we send out an update on what's been happening around our office and the web. Sign up and see what you think. And of course, we never spam.